indieactivity: Give a background of your personal experience with the story, writing, production and marketing
Jonathan Delerue: I always loved medieval and historical movies, epic pirate films or peplum. As a first time director, I thought it would be challenging to start with a tale dealing with swords, castles and dust…
For 15 years I’m used to draw great and expensive storyboard working on French blockbusters and now I am directing for the first time of my life! It was a thrilling experience. It was all new to me !

Guillaume Enard: When Jonathan first talked about making a medieval film, I told him OK but let’s think it as a western. A kind of a “Ratatouille western”! We believe that the medieval genre should be to us French audience like westerns and samurai movies for the American and Japanese spectators. We agreed to use History and weaponry as a way to tell the more intimate story of our main character.

I began as an editor and sound editor on several full feature films and TV Series. I also worked as a consultant for a few distribution companies and broadcasters. Then I became a full time scriptwriter and Head Writer on many animated TV Series. In the meantime, I directed the horror short film “Brumes”

indieactivity: Did you start writing with a cast (You or any) in mind?
Jonathan Delerue: No… But I always imagined Mort-Lieu like our own interpretation of Patrick MacGohan as King Edward in “Braveheart”… 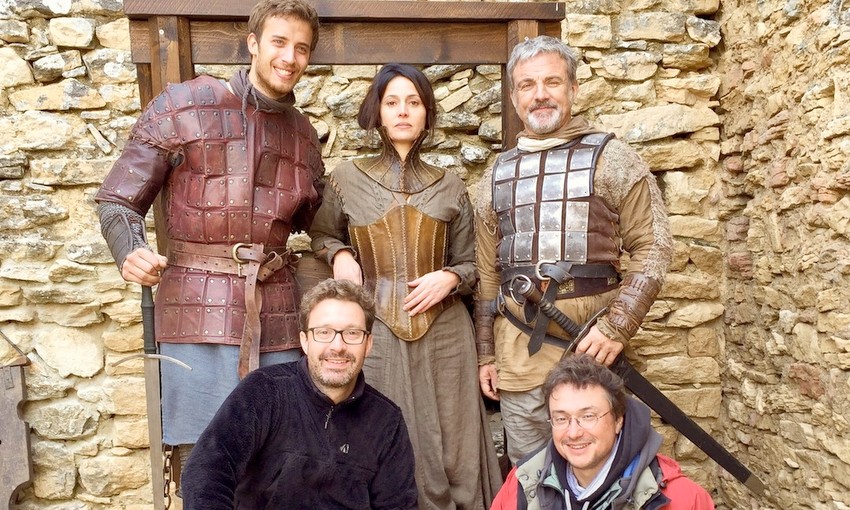 indieactivity: How long did you take to complete the script? (Do you have a writing process?)
Jonathan Delerue: The first script needed 4 months of exchanges with Guillaume… Then it evolved while working with the actors and considering the shooting economical issues…

Guillaume Enard: The writing process itself was fast, about 2 days for every each draft of the script. We just took the necessary time to consider our story and to improve it. It explains the 4 months between our draft 0 and the 1st draft that circulated.

indieactivity: When did you form your production company – and what was the original motivation for its formation?
Jonathan Delerue: When we understood that no one in France would finance such an unusual production and that we’d have to do it on our own!

indieactivity: What was the first project out of the gate?
Jonathan Delerue & Guillaume Enard: By Blood !

indieactivity: During production, what scene (that made the cut) was the hardest to shoot?
Jonathan Delerue: The final scene, when Mort Lieu gets Redemption by acknowledging the mysterious knight as his illegitimate son… Pascal Greggory had to perform multiple tasks in one long shot. No so easy when you wearing an armour. Not to mention the declining sun and a so blowing wind that the steadicam operator could barely stands.

Guillaume Enard: Actually it’s more like a full day than a scene. The first one. Now you’re on the set and you have to direct. No more talking. The dream is reality. Our 1st AD anticipated that and we shot all the Dark Knight materials. 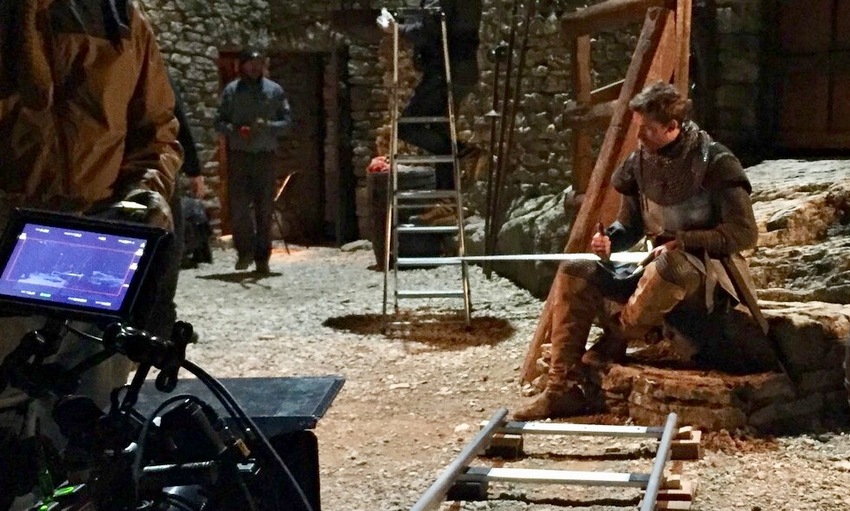 indieactivity: What works better in this latest production that mightn’t have worked so well in the last one you did?
Jonathan Delerue: It’s the first one for me, so…

Guillaume Enard: The attention given to the writing of the script. It makes all the difference… And working with such a cast!

indieactivity: You produced and directed the film, what measure of input did it take to don these hats?
Guillaume Enard: As a director you wish to only deal with artistic decisions and sometimes all the production problems could overshadow our decisions. On the other hand, if you have to face an economic issue you don’t loose time arguing with yourself! Ah ah ah!

indieactivity: Is there anything about the independent filmmaking business you still struggle with?
Guillaume Enard: We’re not sure to understand the question. Let’s say that you always have to struggle to get exposition.

indieactivity: Where do you think your strengths line as a filmmaker?
Jonathan Delerue: I am a storyboard artist for 15 years, and Guillaume is a 10 years experience writer and a former editor. We always agree on what we want to show and what we want the audience feel. Therefore we know what to shoot and what will be used in the editing room. Anticipating and preparation are our strength.

Guillaume Enard: Most of all we always show what matters to our characters and the story. Our rule is “one frame, one idea”…

indieactivity: Let’s talk finance, How did you finance the film?
Jonathan Delerue: It was all self-financed. No governmental or local funding. Claymore Films took the 3/4 of the budget, Guillaume completed with the last quarter. 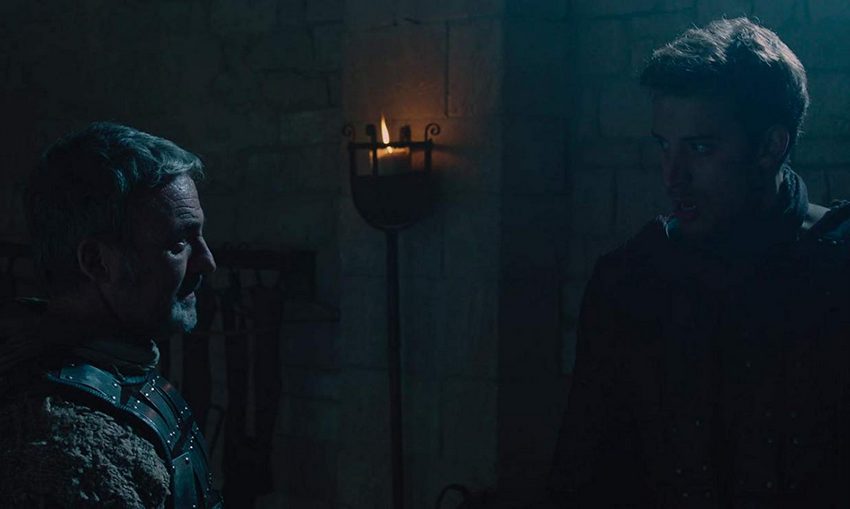 Guillaume Enard: Even if they contributed with a little amount of money, Taozia and Fright House Productions were involved in the shooting. They supported us in crucial moments by providing us with their experience and their organisations.

indieactivity: How much did you go over budget? How did you manage it?
Jonathan Delerue: We were aiming a 50 K€ shooting and we finally went over to 55K€. After that we still had to deal with the post-production costs. Thanks to the extraordinary people who helped us, we had almost everything free until the end. We just needed to be patient.

Guillaume Enard: Taozia and Fright House Pictures shared the extra costs after the shooting. Then, Jonathan and I paid for the few additional costs during post-production, the submissions to the festivals and the marketing.

indieactivity: How important is marketing? Do you think a project can make any dent without it these days?
Jonathan Delerue: We are discovering the Independent Short Film business, all you need to do to get exposition and communicate. We both have jobs, and doing promotional and marketing stuff needs a real amount of time.

Guillaume Enard: With a few exceptions, you’re nothing without marketing today. And it would be dumb to have gone so far and leave the film lying in a drawer.

indieactivity: Can you tell us about your marketing activities on the project – and how it’s gone for you?
Jonathan Delerue: For now we did everything by ourselves, relying mainly on facebook. As we can’t afford to attend in every festival we are included in, we have to be present in some way. That’s why we decided to work with London Flair RP…

Guillaume Enard:: As for now, all the awards we won are the best publicity we can.

indieactivity: What do you hope audiences get from your film?
Jonathan Delerue: We hope people to say « That ‘s the kind of movie I want to see in Theatres ! »

GE: I hope they feel concerned and moved by Mort-Lieu realization.

indieactivity: What else have you got in the works?
Jonathan Delerue: We got a few genre full features film projects, including a medieval thriller, something between “The Silence of the Lambs” and “Name of the Rose”.

Guillaume Enard: We are also beginning working on a new short film, which is artistically as ambitious and risky as “By Blood”.

Lisa Rideout’s documentary ‘One Leg In, One Leg Out’ for LA Film Festival

The Erwin Brothers, behind faith-based hit “I Can Only Imagine” create for Lionsgate