Jason Watkins and Rosalind Blessed in The Overcoat (2017)

indieactivity: Introduce your film briefly (the name of the film, premise, tone, style and the festival circuit)
Patrick Myles: The film is called THE OVERCOAT, it’s an adaptation of Nikolai Gogol’s short story of the same name. It’s a story of a man who, in an attempt to raise his status at work, spends all his money on a brand new overcoat. After a short period of social success, the overcoat is stolen from him and he descends into a spiral, unable to return to his previous anonymity. It’s a tragicomedy that touches on several themes such as individuality, social status and bureaucratic oppression and it’s set in a world that is almost our own, but not quite. It’s been very well received at festivals so far, with appearances at Palm Springs, Galway Film Fleadh, Cambridge, Belfast among others, and DC Shorts, Dinard, Norwich and Aesthetica coming up.

indieactivity: Give a background of your personal experience with the story, writing, production and marketing
Patrick Myles: Inspired by watching a stage adaptation of Diary of a Madman, I began reading Gogol’s work and fell in love with his mix of absurdism and realism. As soon as I read The Overcoat, I knew I wanted to make a film of it, it really spoke to me. I wrote the first draft very quickly, and immediately set about getting a producer on board to try and make it happen.

indieactivity: Did you start writing with a cast (You or any) in mind?
Patrick Myles: I didn’t write with a specific actor in mind, but I did write with a specific ‘type’ of actor in mind. The kind of actor who was comfortable physically, perhaps had had some clowning experience (Gaulier/Le Coq-kind of training) but also was experienced on screen. In Jason, we had all these things and then some. I think he gives a beautiful performance, nuanced, truthful and full of emotion. And most of all, we LIKE him. The rest of the cast support him brilliantly, each character a clearly defined one and comfortable in the tone of the world. Being an actor-turned-filmmaker myself, I think the acting is all-important, and I love working with actors on creating a world for their characters, and then watching them take the reins. 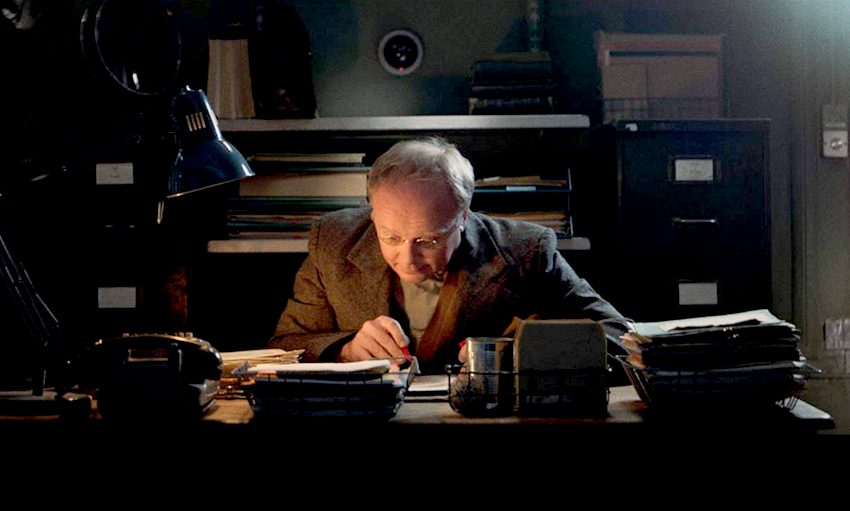 indieactivity: How long did you take to complete the script? (Do you have a writing process?)
Patrick Myles: My writing process is to think about something for as long as humanly possible, make copious notes, do the odd beat sheet/treatment and drink lots of coffee – basically anything to avoid actual writing. When I’ve procrastinated as much as I can, I write furiously and quickly. Then I try to leave the script for a week or two, then come back to it and rewriting. I absolutely love the process of the before and after – the note taking and the editing – but the actual writing I find a real slog. So while I actually wrote this script in a period of days, the actual time spent on it is much greater.

indieactivity: How did you develop ‘your film’?
Patrick Myles: After I’d written the script but before we’d sent it out to actors, I spent quite a lot of time working on the feel and look of the film. I had Dan Morison do some concept art, I put together a document that included moodboards, director’s vision, etc so that I could try and articulate what the film would actually be like in its finished form. This really helped me plan the film in my head because it forced me to think very deeply about what each scene was about and why it was in the script, and to have a very clear vision of why we were choosing this look, tone and feel to the film.

indieactivity: How was it financed?
Patrick Myles: Our producer Kate Turner received a JBA Award, which definitely helped, and then she and the other producer Mark Puddle went out and find some independent finance, but this still was only enough to prep and shoot the film, so we still needed to raise money for post-production, which we did via a successful Kickstarter campaign. We tried as much as possible to not do things ‘on the cheap’, and everyone who worked on the film was paid, which we’re all very proud of because it’s becoming harder and harder to do with independent films. 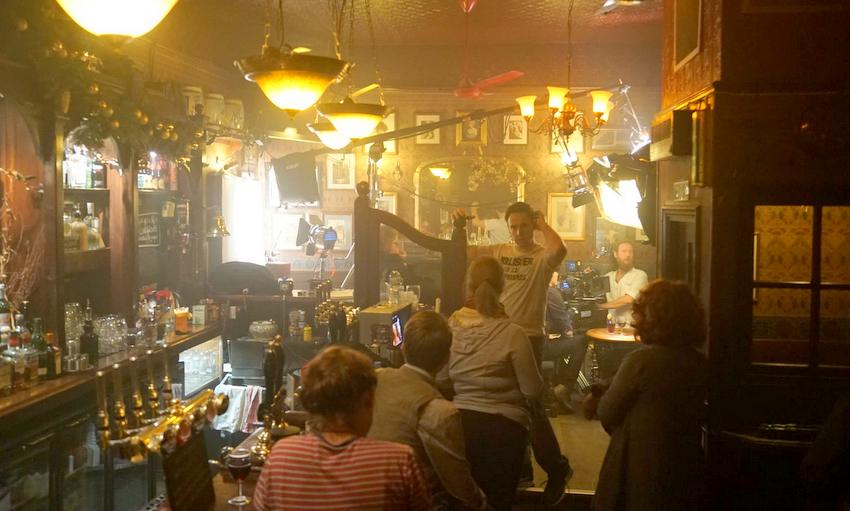 Patrick Myles on the production set of The Overcoat (2017)

indieactivity: Is there anything about the independent filmmaking business you still struggle with?
Patrick Myles: What I’ve just described above – the lack of financing. We applied to every film fund under the sun and all of them rejected us, so it took us 18 months of hard work to raise the money to make it. Obviously that’s not sustainable as a job to pay your rent with, so all of us were working elsewhere at the same time to get by. I think that’s extremely common in independent film, and indeed all the arts, and even then it does feel like you’re a bit of an outsider when you don’t have the patronage of one of the big funders. So basically it’s much harder…

indieactivity: How long was your pre-production?
Patrick Myles: Officially, about a couple of weeks but realistically I had been doing a lot of prep while we were trying to raise the money, so a period of months. I do a lot of prep so the longer the better.

indieactivity: What was your rehearsal process and period?
Patrick Myles: We didn’t have the time or money for rehearsals but I made sure that I met with each of the actors beforehand and went through the entire film, not just their part, so they knew what kind of film we wanted to make, its tone and style and what their role within the world would be. I’m of the belief that the more an actor knows (a good actor, at least), the better they are.

indieactivity: You shot the film in days. How long were your days?
Patrick Myles: We shot over 5 days, doing 8 to 8, so long days. And the last day was a night shoot, so we wrapped just as the sun was rising over the Strand on a Sunday morning. We were all knackered but everyone was in great spirits. 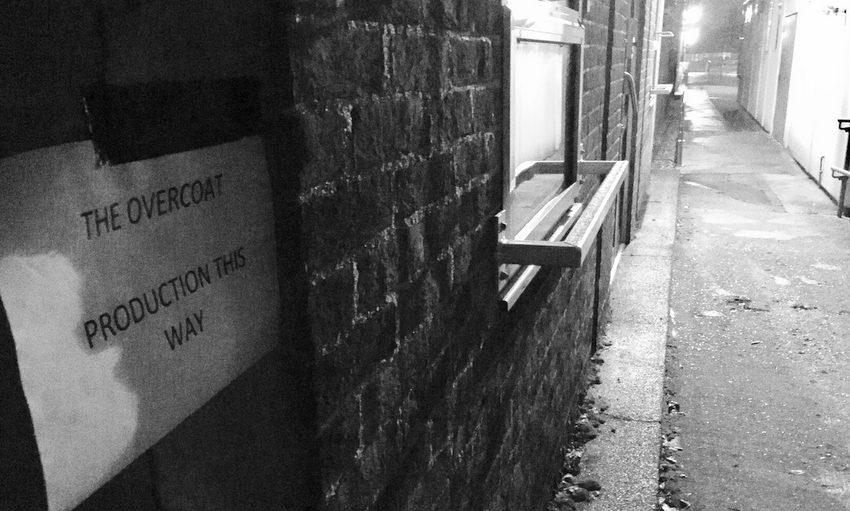 Patrick Myles on the production set of The Overcoat (2017)

indieactivity: Did the tight shooting schedule make it harder or easier? How did it affect performances?
Patrick Myles: From my point of view, the schedule meant that I knew I had to be super-prepared, so it made me over-prepare. The first day ran over, as they often do, but by the third day we were actually back on track and after that there were no heart-in-mouth moments where we had to cut a whole page or anything. So limitations make some things easier and other things harder.

The actors were all very well prepared and they knew that they didn’t have tons of takes so they hit the ground running. I’m not a huge proponent of endless takes, or at least I’ve never had the luxury of being able to work that way, I tend to believe that an actor’s best take is normally in the first 3 or 4, and I found that to be the case on this film. It helped that I had such an experienced cast so the pressure didn’t get to them at all.

indieactivity: How much did you go over budget? How did you manage it?
Patrick Myles: We didn’t! This is probably the only instance in the history of independent film where we were exactly on budget. We knew when we were shooting that we only had money for prep and production, so there was no ‘reserve’, and I guess that focused our minds to bring it in on time and budget. We also asked and got favours from loads of people, from kit to locations to costumes, you name it, so that helped to keep us under. I’m always astonished how generous people are when they think you are truly passionate about a project, it’s very uplifting.

indieactivity: How important is marketing? Do you think a project can make any dent without it these days?
Patrick Myles: I’m not very good at marketing, and I don’t really understand how it works, especially on social media. I think it’s very important, because you put so much time and effort into something, you want people to see it, so I would be wary of any project that didn’t want any marketing at all. Saying that, some projects just catch fire of their own volition and become a phenomenon with, it seems to me, little help at all. Who knows? I don’t that’s for sure… 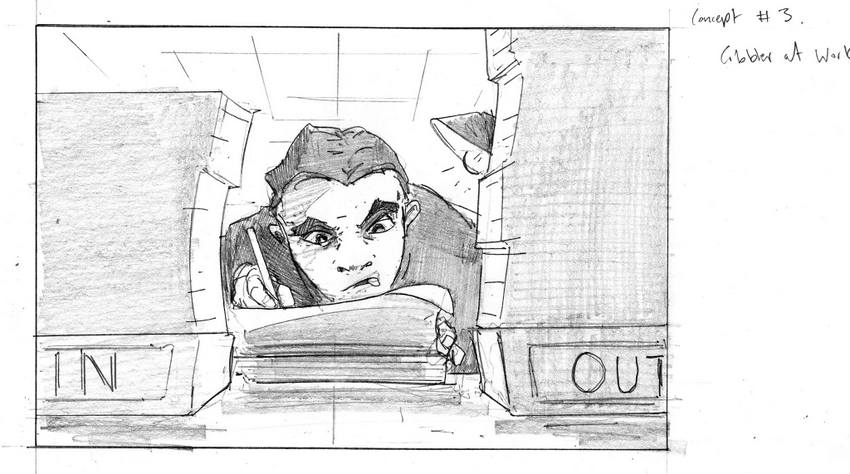 Concept Art for a scene in The Overcoat

indieactivity: What was the experience like of working with such a small shooting crew (?)?
Patrick Myles: The crew wasn’t actually that small, we had a crew of around 20 people maybe, so it was enough for people to concentrate on doing one job, which is always helpful and makes the set very efficient.

indieactivity: The film looks stunning. How did you get such a good look when shooting so fast?
Patrick Myles: Preparation, preparation, preparation. The cinematographer Tom Turley and I did a lot of work beforehand discussing shots, the looks we wanted, what we were planning for the grade, everything, so we didn’t waste any time on set navel-gazing and asking those kind of questions as we were all on the same page. The same with Melanie Jane Brookes the production designer, we had discussed colours and props and their role in the storytelling, so it really did feel as it we were all singing off the same hymn sheet. I tried as much as possible to use the composition of the frame to help tell the story, and using the light and production design were vital tools in that.

indieactivity: Did you look at rushes? On what format?
Patrick Myles: I did, every evening, on the DIT’s laptop! I would have loved a screening room, but alas, we had to compromise somewhere…

indieactivity: What were the advantages and disadvantages in the way you worked?
Patrick Myles: The advantages of the prep time were enormous, and I felt really helped me realise the film artistically. The disadvantages were that taking that long to put the film together is unsustainable in the long run without any sort of external source of income, but I think everyone who makes film independently is in the same boat.

indieactivity: What else have you got in the works?
Patrick Myles: I’m developing two features, one a caper comedy and the other a bit closer to The Overcoat in style and theme. I’ve decided to concentrate on making my first feature, so I can make the jump from shorts. I’m sure it will be a bumpy ride…

PUPPY by Lindsay Bennett is now completed; Prepped for Festivals

Players’ Choice: Vote for the best new game of May 2020

Welcome to the new and improved PlayStation.Blog