A native of New Orleans, Jeff started out his career auditioning for films shooting in Louisiana, but it didn’t take long before he transitioned into creating and producing his own projects.

King Jeff was honored by New Orleans Mayor Marc Morial with a Certificate of Appreciation for his efforts teaching at-risk youth the art of filmmaking. He was also the first filmmaker inducted into the Louisiana Division of the Arts Artist Roster. 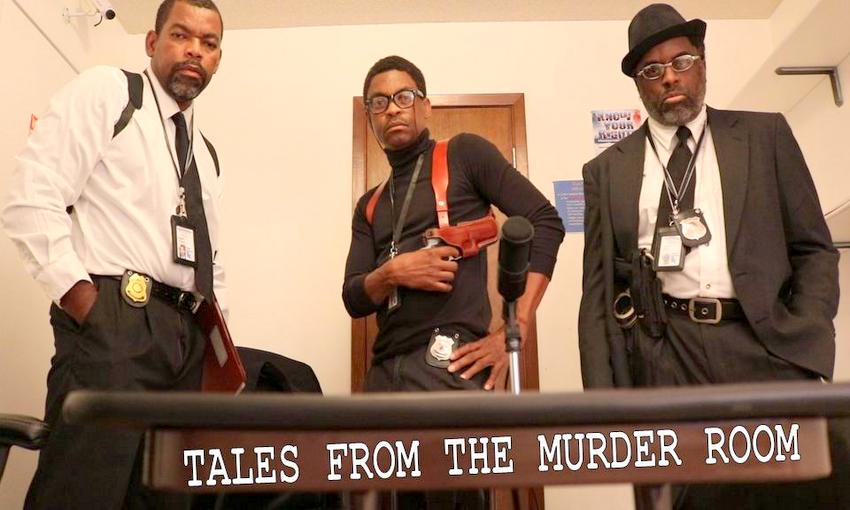 King Jeff, Gorio, and Charlie Hollins Jr. in Tales from the Murder Room (2018)

Indieactivity: How did you get into the entertainment business?
Jeff Hollins: Originally, my interest was only in acting, so I’d go to auditions for films shooting in the New Orleans area. I landed some extra parts and lead roles.

Indieactivity: What made you want to create your own projects?
Jeff Hollins: While I was acting in front of the cameras, I paid attention to what was going on and how things were done. I would ask questions to the director, the cinematographer, the light guy, sound guy, whoever, and they would graciously indulge me. After a while, I thought “Hey, I could do this”. I won literary awards for short stories in high school and then started doing comic books from there. At some point, I decided I’m going to save my money, along with my older brother Tim (who passed away in 2006) and we’re going to make a film. We formed JeTi FILMS, which is an acronym of the first 2 letters in our first names, Jeff and Tim. Younger brother Gorio joined the company later. We had a lot of story ideas at the time.

Indieactivity: Briefly explain your new streaming series “Tales From The Murder Room”.
Jeff Hollins: ‘Tales From The Murder Room’ is the name of a crime novel that is read by a different person at the beginning of every episode. These opening scenes are shot in color and when the book is opened, the stories flash to black and white, where the audience is watching what the reader is reading about, which are homicide detective interrogations and interviews taking place in a Louisiana police station interrogation room called ‘The Murder Room’ (because all of the stories involve murder in some way). What is special about these sequences, is that we will never leave the interrogation room, not for flashbacks, other locations, never. When the black & white story is over, we flash back to the color scene of the reader closing the book. The end. 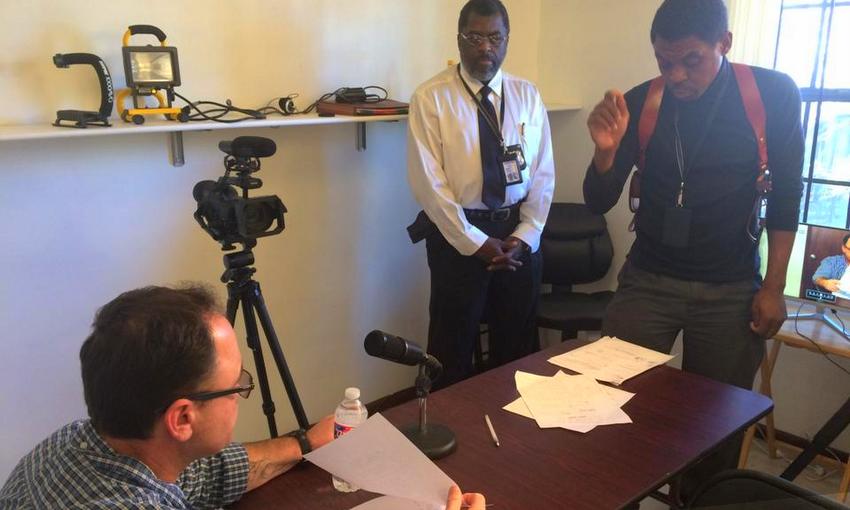 Indieactivity: Where did you discover the idea for it?
Jeff Hollins: Originally, we were contemplating doing a science fiction/horror series using the same format as the detective series, but instead of murder, the stories would center on extraterrestrial sightings and alien abductions. But it’s difficult coming up with those types of stories consistently, so the idea was changed to a modern-day detective series. The disparity is that stories about murder are far easier to write about than stories about alien encounters. There are many ways to kill human beings, as our opening credit animation suggests, but only one way to probe them. It sounds funny, but that was the deciding factor.

Indieactivity: What were the first steps you took to make it happen?
Jeff Hollins: We didn’t really have to do anything special. We were already an established film company and we already had a relationship with Amazon with our previous feature and short films. Gorio and I basically came up with the idea for the pilot episode, The Mitchell Arburrow Incident. Gorio and I wrote about 6 scripts, then collaborated on the design of the ‘murder room’ set. After that we just picked a shooting date.

Indieactivity: Anything you wish you could ‘do-over’ on the project?
Jeff Hollins: Not really. Before editing the first episode, I was torn between filming the central part of the story in black and white or color. Filming in black and white won out because it just made better sense creatively. It made for a more interesting and original concept and look for the series. To us, it made the series feel like nothing had ever been done like it in the detective/crime genre. If you had asked my brother Gorio that question in the early stages of developing the series, he was a little apprehensive about the short format, but, after viewing the first 4 episodes of season one, he is now crazy about the time-frame. We get in and get out. No unnecessary lingering.

Indieactivity: How do you balance acting and creating?
Jeff Hollins: I’ve always managed well doing both because that’s how I started in the beginning. We’re very well prepared before we start filming. Storyboards are the key. To any aspiring filmmakers out there reading this, always do storyboards. Even if you have to draw stick figures, do storyboards. They’ll make your life as a filmmaker much easier. If I’m in a scene that I’m directing, we quickly set up the lighting, which hardly changes in this case, because it takes place in the one room. Then we set up the camera or cameras, depending on the shot. We go over the scene a few times, then we shoot. Barring any unforeseen circumstances, we try to do only two takes then move on. No less than two though.

Indieactivity: Any tips for others looking to create their own projects?
Jeff Hollins: Yes. In addition to the very important ‘storyboards’ advice mentioned earlier, cheaply learn all you can about filmmaking. Read books, watch movies, tv shows, ‘making of’ features, then when you’re ready, just do it. Filmmaking is art and, as the artist, you have to stick to your guns creatively. Don’t deviate from your ideas or style. Don’t be influenced by doubters unless you happen to agree with them. If you’re really passionate about your project, do it your way. This is the only way to introduce really fresh things to the world of filmmaking.

Indieactivity: What do you want to change about the film business?
Jeff Hollins: I gave up on trying to present anything to Hollywood a long time ago. It’s a closed door unless you know someone or you manage to get your film in a major festival, in which case you still have to know someone. There are those rare times when a really open-minded major studio exec would see something and say, “You know what, I’m going to take a chance on this person and back him/her because I like what I’ve just seen”. Hollywood seems content with re-boots or doing the same soup, warmed over. There’s nothing fresh getting in. It just seems like, creatively, everything looks like it’s being done by the same person. The last really good and totally original film that I saw was Three Billboards Outside Ebbing, Missouri. 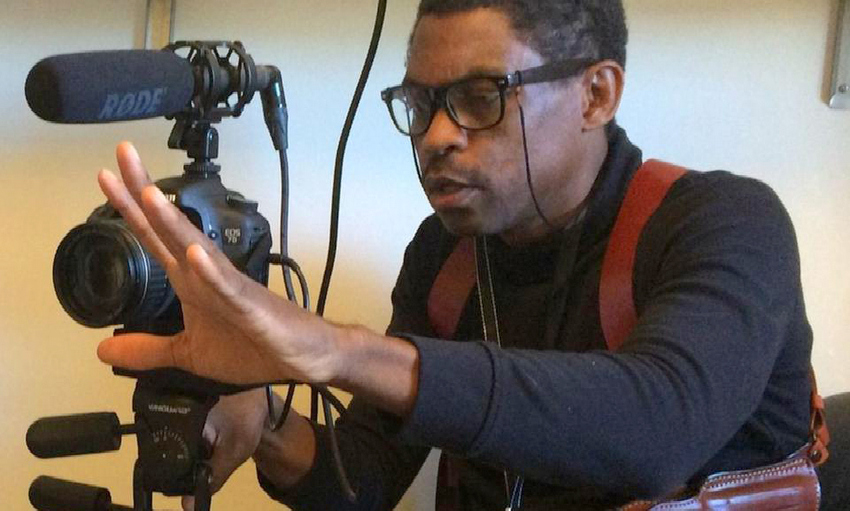 Indieactivity: Who is your creative idol and what do you love about their work?
Jeff Hollins: My most inspiring filmmakers, for various reasons, are Spielberg, Chaplin, Orson Welles, Sergio Leone, Jerry Lewis and Quentin Tarantino. However, no films inspire me more than the early films of Steven Spielberg, because he did it his way. Those early films had great stories, characters, realistic overlapping dialogue and wonderful camera angles. Even the Night Gallery and Columbo TV episodes he directed stood out from the others. He had guts and did exactly what he wanted to do and introduced a totally new style and way to the film world. Quentin Tarantino and Sergio Leone are the same as far as having their own styles. They put their creative stamps onto their work. And that’s exactly what I do.

Richard Raymond Director of Souls of Totality From Script to Screen

Kate Turner Unveils How She Produced Patrick Myles’, The Overcoat