GRIP launched late in 2018, and has already seen massive updates, with new tracks and new modes being introduced. This morning, the team have flipped the racer upside down once more, with a game changing update in the introduction of AirBlades – brand new anti-gravity (think WipeOut!) changing the fundamental elements of gameplay, mechanics and physics, all in one surprise free update!

Inspired by Rollcage, GRIP was one of the few success stories from a number of racers in recent years. A return to the hardcore combat scene of the ’90s, bristling with heavy weapons and packing ferocious speed, the game is an intense, sensory feast. Now spoiler alert, I’m not involved in the development, but my friends and people who worked on Rollcage are. GRIP’s launch brought back great memories on a game I’m proud of, so I thought what better place to share them than here on PS Blog!

The genesis of the idea we focused on, was making the fastest racing game ever seen on PS1. At first, I remember receiving a lot of push-back over the achievability of this, as it was technically very ambitious. But the lead coder, Stephen Bennett, was one of the most impressive coders we’d hired. He had developed Blast Chamber and I had seen how much performance he was getting from his engine. He was confident in getting all that speed and polygon destruction from a humble PS1!

Someone suggested we try allowing the cars to flip over and keep racing. The team loved the idea and put it into the prototype. It worked brilliantly and since launch, went on to become a bit of a cult hit, finding its home in bedrooms, dorms and forums.

I would give shout-outs to Stuart Tilley, Dave Perryman, Stephen Bennett, Andrew Wright, Tony Heap / Richard Priest / Rob James – artists who really drove the look of the Rollcage. And of course, there was Rob Baker. A man who did sterling work on the PC version and mastering the multiplayer network gameplay.

When I first saw GRIP, I immediately recognized it as something that could have come straight out of Rollcage – the cars are unmistakable – the upside-down driving has never been done (to my knowledge) in another game – and the futuristic landscapes were reminiscent too.

I often hear people say GRIP is Rollcage 3 and I totally understand why they say that – it absolutely is!

The footage I’ve seen nails the original vision of speed and intensity – I love it. I will admit to initially having a strange feeling of ‘Oh wait, what is someone doing copying Rollcage like that… that was my game.. how can someone do that?!’ I had an emotional investment in Rollcage. But as soon I discovered it was created by Rob Baker, and had involvement from some other ex-ATD folk, I was totally supportive of it. I thought, wow, good for them – they deserved so much more credit back then!

And so, even though I have zero involvement in GRIP, I still feel a personal attachment to it because of the shared history – and feel quietly proud of being part of the ‘origin story’ for GRIP, plus now seeing this update, it’s like Rollcage and WipeOut had a baby! 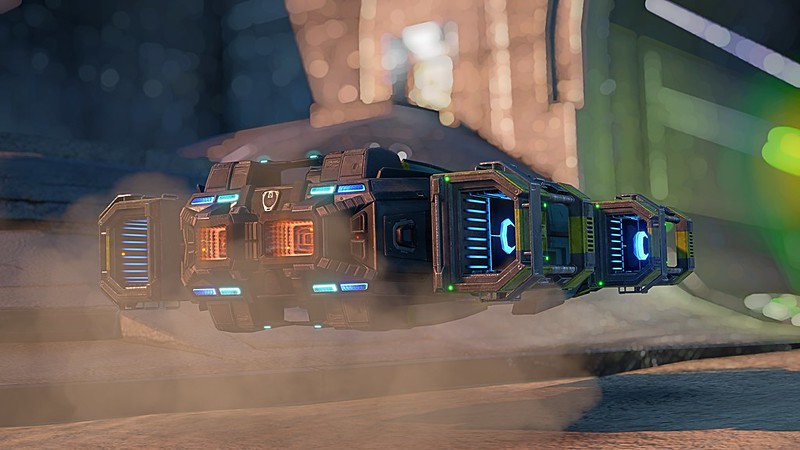