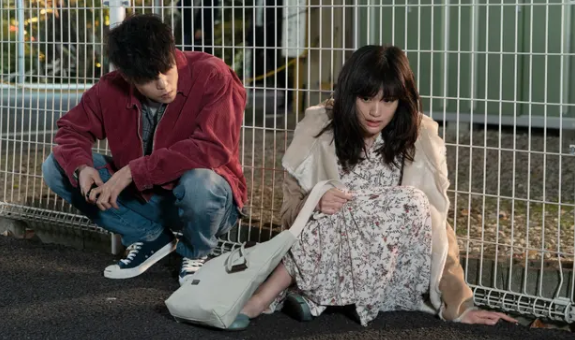 Japan’s maestro of pulp Takashi Miike is approaching his 60th birthday (this August) and, far from slowing down, remains fanatically prolific. Here is his 103rd feature credit, a violent yakuza caper that hits the ground sprinting from the opening credits, bringing in the gruesome decapitations pretty much from the word go.

Leo (Masakata Kobota) is a young boxer who is told he has an inoperable brain tumour, with little time to live – and a fortune-teller informs him that he should be fighting for someone, not just for the selfish pleasure of victory. Emboldened by these medical and supernatural prophecies, Leo steps in to help a terrified young woman, Monica (Sakurako Konishi), who has been forced into prostitution by yakuza gangsters. She is also tormented by visions of the abusive dead dad whose mob debts got her into this mess in the first place, and the former classmate she once persuaded to kill him.

One of the yakuzas, Kase (Shôta Sometani) is in league with a corrupt cop (Sansei Shiomi), planning to steal the gang’s drugs and blame it on Monica: a rash plan whose chaotic series of further killings they must further blame on a rival Chinese gang.

It all hangs together, and Miike brings his own mad, punk-rock energy to the whole thing, breaking out a bizarre animated sequence near the climax, just for the pure hell of it, and incidentally giving us an uproarious image of dozens of cop cars chasing a fugitive gangster driving across a bridge. “Morning light does not suit the wicked,” is this villain’s musing comment on his own situation after a hard night of chaotic ultra-violence.

As ever with Miike, the sheer profusion of material, the torrent of wacky creativity, means that there is always something to hold the attention. It’s bizarre and very unwholesome. But weirdly inspired.

• First Love is released in the UK on 14 February and in Australia on 14 March.