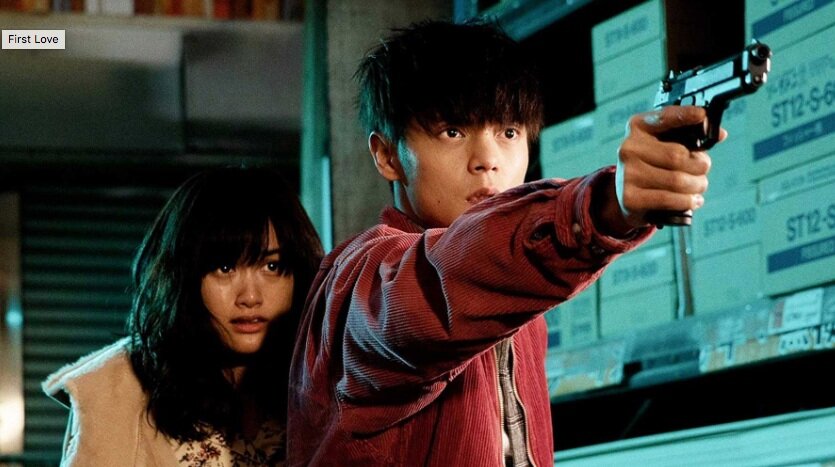 When young boxer Leo (Masataka Kubota) is diagnosed with a brain tumour, his life is suddenly cut short. He then runs into drug-addicted trafficked prostitute Yuri, also known as Monica (Sakurako Konishi), who is embroiled in a plot planned by a cop and a yakuza wildcard (Shôta Sometani). As Leo and Monica attempt to outrun warring factions, things unravel.

Takashi Miike’s work is never knowingly sane. The director of Audition and Ichi The Killer has always peddled anarchic, bloody violence — gross encounters of the absurd kind — and if First Love is anything to go by, he’s quite happy where he is. There is a decapitation two minutes into the film, and it is by no means the last. “The smell of war is in the air,” says conniving cop Otomo (Nao Ohmori), and he’s not wrong — everyone is at war here. The yakuza, the triads and the police go at it incessantly. Buckle up.

Heroes and antiheroes blur in First Love, but Leo (Kubota) and Yuri/Monica (Konishi) are worth rooting for. With Leo’s life in the toilet he embraces nihilism, feeling nothing, fully up for a death trip. Boy, does he get one. Running into Monica, who has been sold into sex work and becomes unwittingly embroiled in a haphazard plot planned by Otomo and psychotic yakuza wildcard Kase (Sometani), Leo puts his fists to good use as he and Monica navigate the carnage, which includes the ghost of Monica’s father, a sorry state prowling the streets in gleaming white Y-fronts. And that’s as much plot as you need to know. It’s only there to facilitate the pandemonium.

While First Love isn’t an out-and-out gore-fest, there’s barely a scene without a fight, or at least some one-sided attacks, many of them lasting around three seconds — cars slamming into people, someone’s face being intentionally smashed into a dashboard… sudden bouts of violence that mostly go for the funny bone, if you can stomach the stuff. It is also non-discriminate, and often verges on the wrong — a very sadistic slapstick, more Itchy & Scratchy than Tom And Jerry. We’ve seen this stuff before, but rarely dialled up to this degree. Guns and swords abound. Limbs are freed from their bodies at a generous rate.

First Love is like a bloodier True Romance, as well as being exactly the sort of flick that Clarence and Alabama would watch in the cinema. Leo and Monica’s odd-couple team-up holds the film together, with just enough emotion to make it work — a genuine sweetness amid the chaos of the day. And what chaos it is — with so much double-crossing, there are Mexican stand-offs not just at the climax but at every turn. Miike’s violence, though, is always inventive, the calm camerawork letting the action take care of business, Nobuyasu Kita’s cinematography providing some pretty poetry, and Kôji Endô’s erratic score going from slide guitar to saxophone to strings depending on its mood.

It’s a vibrant ode to life, teeming with death. It’s a crowd-pleaser too, just as long as that particular crowd is baying for blood. “Everything’s fucked,” one character declares as things go south, and that just about sums it up.

The Great Hunger: Rave Review – A tale of heroism in the time of hardships

Further reading: Historical epic The Great Hunger and the famine that ravaged Ireland

The Great Hunger: Rave Review – A tale of heroism in...

Further reading: Historical epic The Great Hunger and the famine that...

36 Years on from Live Aid and Ethiopia is in crisis...

The Great Hunger: Rave Review – A tale of heroism in...

Further reading: Historical epic The Great Hunger and the famine that...